A look back: Transplant Day 1

So I am going back in time to write these few posts.  I think it is important to write the details down while I can remember them so well.  While I was in the hospital, every time I would try to type I would fall asleep.  The drugs were pretty strong.  But luckily I remember most of what happened.

On the morning of the transplant, Matthew and I, my cousin Kellie, and our parents arrived at the hospital at 5:15 AM with a bunch of luggage and a whole lot of nerves.  We waited together for about five minutes before we were called back into separate rooms to change into our gowns.  They gave us white compression socks and we waited to get called into surgery.  While we waited, we were visited by surgeons and doctors checking in with us.  The anesthesiologist came to see me and put an IV in my hand.  It was the most painless hand IV I have ever had. Those things usually take three tries on me. 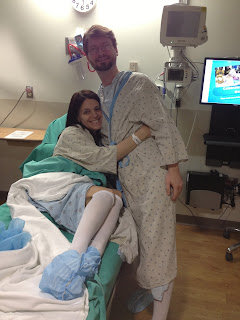 After my IV I went to say goodbye to Matthew, who was about to be rolled out.  We kissed, hugged for a long time, and said "I love you".  I said the only thing I could think to say as my last words.  "Thank you."  Then they rolled him out on his bed and off he went into surgery.  It was quite overwhelming.

About an hour later, the anesthesiologist came in and told me it was time too go to the operating room.  I said goodbye to the Kellie and our parents and they rolled me out.  I was really nervous, but excited too.  They rolled me past Matthew's room and I found myself wanting to look in so badly.  He was opened up on a table right at that moment, poor guy.  I find in these pre-surgery moments my mind tries really hard to remember everything I possibly can before going under.  Look at all those tools over there.  Are they going to use all of them?  I wonder how Matthew is doing.  Which one of these people are going to put the catheter in me?

They transferred me to the table and I was pretty nervous.  They had me position myself where I needed to be, and before I knew it the gas mask was put on my face.  Literally moments later I was out.  I was a little disappointed that no one told me I was about to go out.  I do love that last moment.  But that's ok.

I woke up in recovery hearing women saying things like, "There's too much urine!  We need to give her saline." and "This kidney just won't quit peeing."  I laughed to myself and felt really relieved.  Sometimes the kidney takes a few hours or even days to start working.  But Matthew's worked right away and started cleaning me out instantly.  I was left in recovery longer than anyone expected I guess. I don't know because I kept dosing in and out.  But eventually they rolled me up to my room and my mother was the first one to greet me there.  The rest of that night was pretty groggy.

I expected to see Matthew come into my room to visit me, but I asked about him and my mom said that he wasn't doing too well, and that he was having difficulty getting up.  I knew they wanted him to get up on day one.  It was more important for him to get up early than me.  So when I felt I had a burst of energy, I thought I would visit him instead.  So with some help, I stood up and leaned on my IV pole.  It wasn't nearly as painful as I thought it would be.  But I was really determined.  I knew that I could cheer Matthew up if he could just see me. 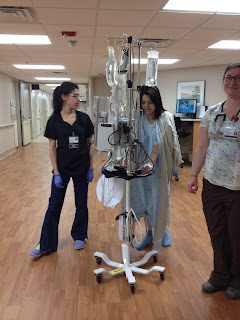 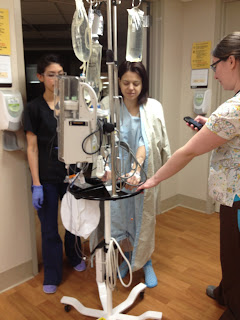 So off we went down the fall and across the nurse's station.  I pushed my IV pole the whole way and took small steps.  I reached his room and I heard him say, "She's here?!  Let me see her!!"  Then I walked in and said "Hi Baby!"  He looked absolutely shocked to see me, like I wasn't real.  He kept saying "I can't believe you are here!  Look at you!  You are so beautiful!"  I kissed him, we both cried, as did everyone else in the room.  I kissed his hands and said the same last words I said to him when we last spoke.  "Thank you."  Then I sat on a chair and fed him some jello.  He was pretty drugged so I didn't stay long.  I leaned in to kiss him before going back to my room.  That was pretty much the end of that day for me. 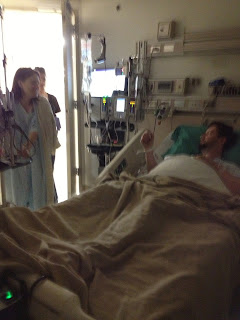 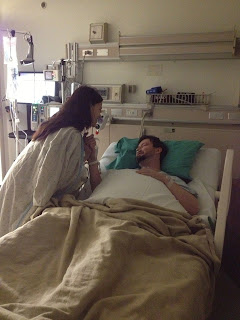 So at that point, things were looking good and we were on our way to recovery.  I heard that after I left,  Matthew stood up and took a few steps, but couldn't make it to my room.  But I knew he would come see me the next day for sure.