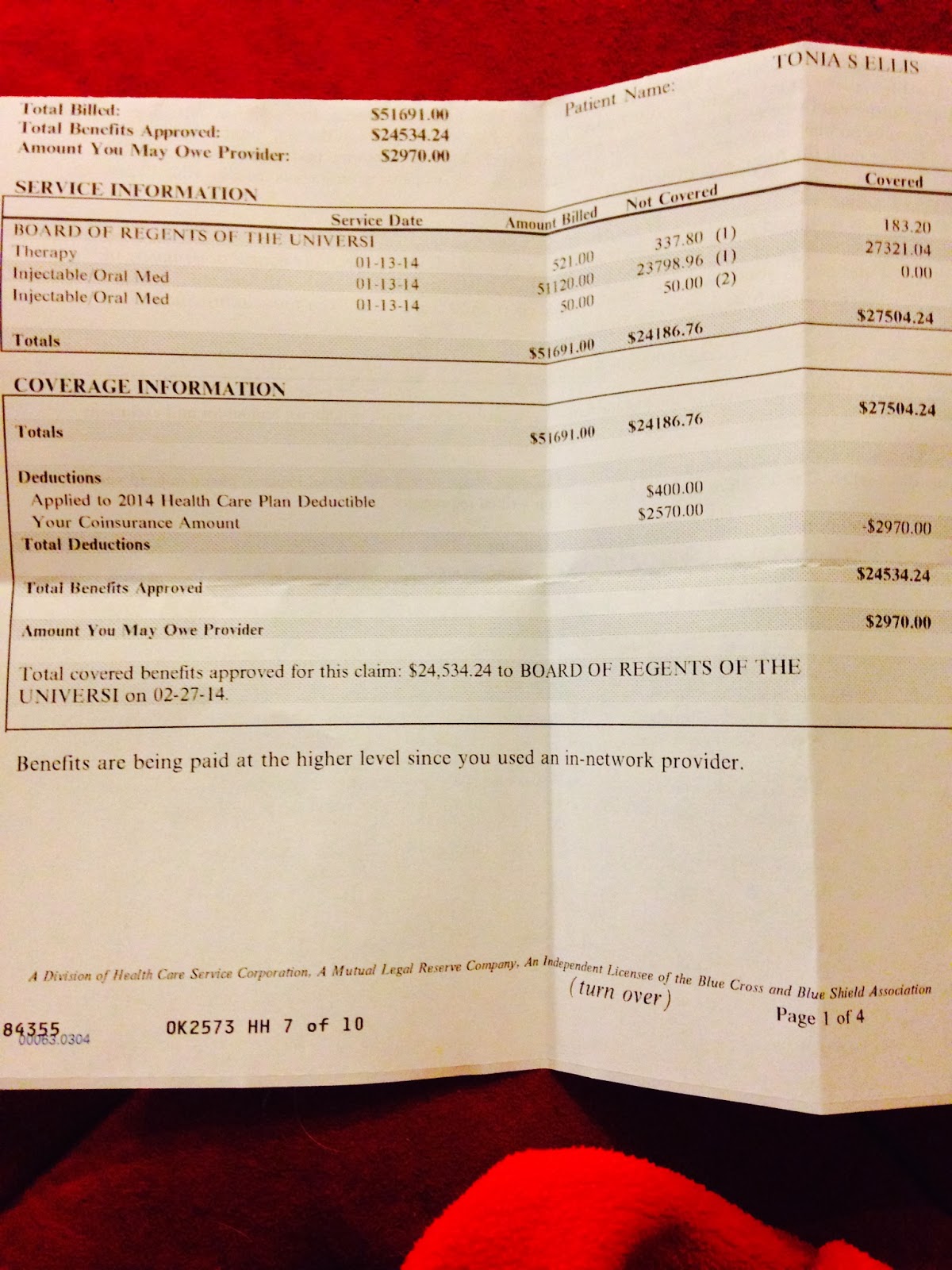 Yeah, this is an Explanation of Benefits for me.  It is the first of the year.  So as you can see I have my entire deductible due at once.  The reason for that is that Soliris is $51,691.00 a dose.  A DOSE.

Recently I watched a video online about how Obamacare has ruined everything and that premiums are going up for some people and so are their deductibles.  I am sorry to hear that, really.  But these people were complaining that they had to go from $500 deductibles to $1000, or even $1,200 deductibles.  Um..wow.  Wanna trade?

Some of these people were healthy, and some had their own issues.  But none of them were sick enough not to be able to work full time jobs, so I don't consider them chronically ill with debilitating illnesses.  Sorry for the assumption.  I did work full time from 2006 to 2011 with aHUS and honestly looking back have no idea how I did that.  Oh I remember, by being hospitalized every break I got and Skyping classes from my hospital room.

So.....I think it is a fair assumption that Blue Cross hates me and wants me to die.

Now.  Alexion, the pharmaceutical company that makes Soliris, is making $1,343,966.00 a year to keep me alive.  They don't want a cure at all, they are having a great time with my aHUS diagnosis.  They only wish I had been diagnosed in 1999 instead of 2011!  So, that means that the 300 or so aHUS patients in America using Soliris to survive are making them about $403,189,800.00 a year.  Just in America.  And THAT doesn't account for the PNH patients that need Soliris for their disorders.  I won't even count them.

So...I think it is a fair assumption that Alexion loves me and wants me to live without a cure for a long time.

Don't get me wrong.  Alexion has been very kind to me.  They have offered counseling, they check up on me every two weeks, and they are very helpful when I have questions.  It is clear they pay their customer service representatives a lot of money to work there.  One has even haggled with my insurance company while I was on the phone in a three way call.  She was ruthless.  And if she was going to lose her company even ONE dosage of the precious drug, it would be half a year's salary for her I am sure.  I am not judging Alexion.  I couldn't be more glad they exist and that this drug is available to me, and that they have made it clear to insurance companies it is a medical necessity.

I hate to add politics, but my own family member said to me that people are demanding benefits without working to get them.  Now, when these political people (I don't want to generalize by saying republicans, because I am not making a political statement.) say that nothing is free and you have to earn what you make, I agree with that partially.  But I can't work full time.  I just can't.  We have a one income household now, since this diagnosis.  I almost died from working so hard all those years.  And I "earned" a $94,077,620.00 disease to show for it.  I am dependent on my husband.  If I didn't have him, I would be dependent on Medicare alone, and in three years I won't be able to even have that.  I would have no choice but to be on government programs including food stamps, welfare, medicaid, or handouts.  Anything that would keep me alive.  I didn't earn aHUS, and I didn't ask for it.  I would LOVE to be completely healthy and independent.  I would love to just have an annual pelvic exam and an occasional z-pac when I got sick.  I would love to not have doctor's numbers on speed dial.  But I don't have that luxury.

So before we start blaming people for wanting the basics in life, like being able to afford medicine, food, and shelter, let's look at the reality of the situation.  Someone is making a lot of money out there on people like me.  And it's not me.  And if you are reading this, chances are it might not be you either.

If you are reading this and you are one of the people profiting from my disease, could you lend me $3000?  I have a deductable to pay.