My Mom is the bravest woman I know.

But when I came back from Europe, the disease really took off.  By Thanksgiving I needed a biopsy and was suffering severe renal failure.  My mother and sister got tested to be donors, and we decided my mother would be the lucky one to be first to give me a kidney.  At the fine age of 62, she got ready for the surgery.

Here is a message I wrote my family:

Mom and I are sitting in my school library and we thought we should update you all on the latest.   So far, mom has been tested for every kind of abnormality you can possibly find in the human body in the past two days.   She has been given x-rays, blood tests, cat scans, tb tests, ultrasounds, heart monitors, ekg's, echocardiograms, stress tests, you name it.   If something is wrong with her, they are going to find it.   And luckily, all of her numbers have been very good.   All of her levels are in the "normal" range, and the doctors are saying she is looking like a good candidate for my kidney donor.   We met with her surgeon today (kind of a goofy cooky guy) and he seems optimistic about the process.   He told her all about the specifics and what she can expect afterwards.   I am getting my testing done on this friday, and as soon as my tests go through and I meet with my surgeon, we can begin to schedule this party.   Medically, everything is looking great, unfortunately we are having some financial catches and hurdles.   Basically, I am possibly too young to get the full benefits of medicare, and I am too old to stay on my parents insurance forever.   (go figure!)   It gets really complicated after that, so we are trying to interpret all of the information that is being thrown at us.   We will keep everyone posted as things evolve. 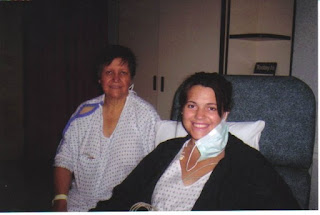